Inicio / News / How to solve the problem of pointer jitter of metal tube flowmeter?
News categories
Contact Us

How to solve the problem of pointer jitter of metal tube flowmeter? Posted by : admin / Posted on : Apr 08， 2022

3. Severe pointer shaking: mainly due to medium pulsation, unstable air pressure or the pressure, temperature and flow rate of the gas operating state given by the user do not match the actual state of the rotameter.

2. The pointer stops at a certain position and does not move
The main reason is that the float of the rotameter is stuck.

Generally, because the valve is opened too fast when the float flowmeter is used, the float quickly hits the stopper upwards, causing the stopper to deform and the float to be stuck. However, it is not excluded that the float is stuck due to the misalignment of the float guide rod and the stop ring. When handling, remove the meter, remove the deformed stopper and reshape it, and check whether it is concentric with the guide rod. If it is not concentric, it can be corrected, then install the float, push the float by hand, and feel that the float is unobstructed up and down. Yes, in addition, the rotameter must be installed vertically or horizontally, and cannot be tilted, otherwise it will easily cause the meter to jam and bring errors to the measurement. 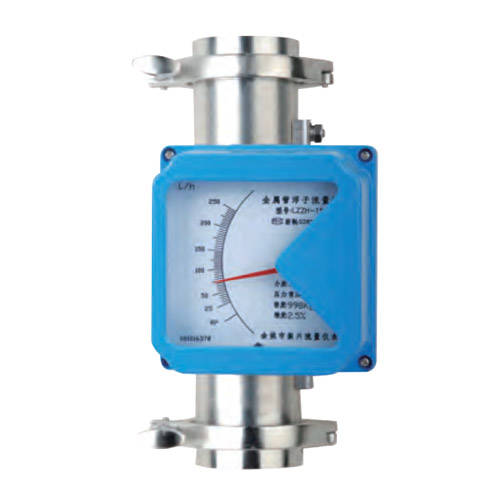 2. The large density change of the liquid medium is also a reason for the large error. Before the instrument is calibrated, it converts the medium according to the density given by the user, and converts it to the flow rate of water in the calibration state for calibration. Therefore, if the density of the medium changes greatly, it will cause a great error in the measurement. The solution can be to bring the changed medium density into the formula, convert it into an error correction coefficient, and then multiply the flow measured by the flowmeter by the coefficient and convert it into the real flow.

4. Due to many factors such as long-term use and pipeline vibration, the moving parts such as the sensing magnet, pointer, counterweight, rotating magnet, etc. of the float flowmeter are loose, resulting in large errors. Solution: You can first verify by pushing the pointer by hand. First, press the pointer at the RP position to see if the output is 4mA and whether the flow rate is 0%, and then verify according to the scale. If discrepancies are found, the parts can be repositioned.